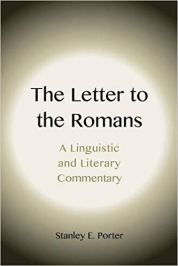 “Paul now elaborates a set of paradoxical parallel statements that describe the results of what it means to be under the control or authority of sin as a human being—despite him being a justified and reconciled person. The opposition is developed in dialogical format between action and intention, or accomplishment and will. He continues to use this encapsulation of his argument throughout this larger section. The opposition revolves around the dichotomy between what it is that he wishes or intends to do and what it is that he actually ends up doing. The way the intentionality and the actions are opposed reveals the Christian human struggle. One knows what is expected of the justified and reconciled person, but that one is nevertheless still a human being or is fleshly and under the authority of sin.”

“Rather than ending on a positive note, the conclusion that Paul reaches draws the stark contrast between the two realms. One realm is the inner human, governed by the law of God and motivated by intentions to do what is good; the other realm is the fleshly human made up of its individual human parts, governed by the law of sin, that wages war against the inner human and is at work in this fleshly sphere so as to accomplish evil. At this point—whether out of rhetorical exasperation, spiritual frustration, or, most likely, simply recognition of the reality of human existence as both a spiritual and fleshly creature—Paul observes that he is a ‘wretched’ (cf. Rom. 3:16) human being (Rom. 7:24). Many translations highlight the emphatic value of Paul’s statement (e.g. NRSV, NIV). But at this stage in the argument, I am not convinced that such an exasperated response is warranted. Paul’s response is probably more of a logical recognition of the condition of the human being—even one who is justified and reconciled to God and who has become a slave of righteousness. Being a slave of righteousness means that one’s inner person is controlled by the law of God. Nevertheless, Paul says, the reality is that even though my inner person is controlled by this law of God and my intentions are geared toward doing what is right, the reality of daily life in this fleshly condition is that these good intentions are constantly thwarted, because there is an ongoing battle with another law, the law of sin, which controls my physical existence by occupying and enslaving my physical body.”

“In answer to his own question regarding how he can be rescued from his human condition, Paul declares his thanks to God through Jesus Christ our Lord (Rom. 7:25). I have noted several times [in the commentary] where the wordgroup ‘Jesus Christ our Lord’ or the like is used in Romans to mark out significant episodes, in which the work of Jesus Christ has been indicated as the means by which God has accomplished his purposes. This instance also performs this function. Paul gives thanks to God (by using the lexeme ‘grace’), and he does it through the Lord Jesus Christ, recognizing that God’s work of rescue and redemption takes place through the mediating action of Jesus Christ. What Paul does not say is that he gives thanks to God for rescuing him from or transforming him in this earthly existence, so that he is no longer the recipient of the marks of sin and death, undoing the effects of the fall in his earthly body. Instead, Paul re-states his explicit recognition of what the life of the person of faith is while in this earthly realm. Some have taken Paul’s statement as anti-climactic, or as remote from the issue at hand, or as a desperate conclusion that does not resolve the issues (Cranfield 1975/79: 1:368). Some have even gone so far as to argue that the text has been reversed, so that the statement regarding giving thanks to God should come after the concluding statement of Rom. 7:25 (C. Dodd 1932: 104, but with little argument; Michel 1957: 144, 154-55), or to argue that it is a gloss (Käsemann 1980: 211-12). Less extreme is the supposition of a chain-link interlock of Rom. 7:25a and b (B. Longenecker 2005: 88-93). The argument of the passage, however, makes good sense as it stands, within its larger cotext. Paul gives thanks to God through Jesus Christ—not for necessarily doing anything. He then draws a strong conclusion (‘now therefore’), from his above characterization. He says that ‘I myself’ (note use of the personal pronoun and the intensive pronoun for prominence), in my ‘mind’, am a slave to the law of God, but, in my flesh, to the law of sin (Rom. 7:25). The human life, even for one who is justified and reconciled, is one of continual enslavement. The human body cannot escape its humanness as being in the line of Adam and is subject to sin and death, while the transformation of the mind that has occurred means that the person is not free, but enslaved to a new master, the guiding principles of God.”