Canada has a unique phenomenon of a single scholarly conference that brings together for a week in one place many if not virtually all of the professional societies of the humanities and social sciences. The various societies are staggered, so that similar groups overlap. This year the congress was held from May 30 to June 5 in Ottawa, Ontario, the capital city of Canada, at the University of Ottawa. Ottawa is a wonderful city, with all of the trappings of a major capital city, including Parliament Hill, some great museums, and many great restaurants (especially Italian ones, I discovered). The prices, when compared to other capital cities I have visited, are pretty reasonable. 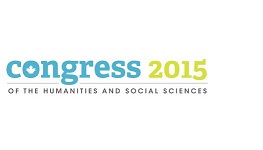 The best part is the individual conferences themselves, as well as the book exhibition. The book exhibition is not as large as the one at AAR/SBL, or even ETS, but it does attract publishers from around Canada that one would not see otherwise—and there are some very interesting books to be found.

As with most conferences, I think that the quality of papers varies from session to session, although there were some very good papers in probably most of the society offerings. (One session on Baptist Women was particularly good in several respects.)

The Old Testament representation at CSBS is stronger and probably better overall than in New Testament, although it is not clear why this is. It doesn’t need to be that way. Nevertheless, one highlight was the lecture by Professor Hugh Williamson on S.R. Driver, entitled “In the Shadow of S.R. Driver: A Centennial Appreciation.” I have known Hugh for thirty years, and it was great to see him again and hear his talk on one of his predecessors in the Regius Chair of Hebrew at Oxford. He gave an excellent overview of Driver’s background, the reasons he got the chair, a summary of his major publications, and a comparison of him with others who thought they might have merited the chair, all illustrated from archival material such as letters. Hugh pointed out that Driver’s justifiably famous work on tense and aspect in Hebrew (A Treatise on the Use of the Tenses in Hebrew, 1874), published when he was only about 27, was originally written as a student book—which shows how far we have gone downhill in the study of biblical languages especially New Testament Greek, until most students today struggle with inadequate textbooks to accomplish next to nothing of lasting value. This is in acute evidence in most monographs and the vast majority of commentaries, especially New Testament ones in my experience. The fault is in our educational systems and their demands, in our textbooks and their lack of ambition, and, perhaps most of all, in too many inadequately trained and equipped teachers, themselves the products of declining standards. It is hard to imagine someone like Driver passing through the Old Testament field any time soon.