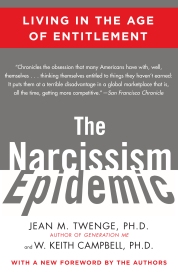 I discovered a book of great interest a few weeks ago, entitled The Narcissism Epidemic: Living in the Age of Entitlement, by Jean M. Twenge and W. Keith Campbell (New York: Free Press, 2009).

As I was perusing the volume, I came across pages 244-55 on religion and volunteerism. As the authors make clear, religion has traditionally been an opponent of narcissism, as the kind of “me first” mentality does not fit well within communal church life. Nor does it fit well with the kinds of virtues that the church has traditionally taught, such as meekness and humility and forgiveness (remember that annoying sermon by Jesus where he spoke about such things?). Their book should give us all pause to think.

Well, the good news—at least for narcissists, of whom we appear to have a shockingly growing number—is that the church is now catering specifically to them. That’s right, the church has embraced narcissism and with it narcissists, especially as reflected in the megachurch syndrome (or should it be “megachurch sin”?).

Narcissism is about putting me first and feeling entitled to have life my way and on my terms. The megachurch—and I fear many other not too great churches as well—caters to this clientele. There are no demands placed upon the attender, they can come when they want, as they want, and do what they want, or not. In fact, it sounds much like the “seeker” kind of church was specifically made for (and by?) narcissists. You don’t want to kneel, don’t worry. You want to wander around a bit, not a problem. You don’t want to contribute in any way, that’s cool, because it’s your choice, the way you like it!

Narcissists can even get designer coffee—just the way they want it—that they can drink any time and any where. And regarding guilt, one need not worry, because God, so many are being told, wants them to succeed in a big way and without hindrance, including financially. It’s not just prosperity gospel churches that appear to be given to narcissism—although they arguably may be the worst examples—but I can see how neo-Reformed churches with their emphasis upon exalted self-abasement, or out-repentance of the other, play right into this as well.

Not only are churches now designed for narcissists, but they are—and this should come as no surprise—all-too-often being led by big-time narcissists. I cannot help but think that so many of the problems that the church has witnessed in recent times over a huge variety of not just misbehaving but clearly unethical behavior by them is because such hyper-pastors believe that, in reality, it really is all about them, and that the rules, made for the little people, don’t apply to them—whether these have to do with finances, personal behavior, or simply common decency or civility. We are only aware of those who make the news (and we have seen plenty of news of these disappointing mega-church pastors in recent times)—but narcissism itself is not a crime, so who knows how many more narcissists there are out there!

As I was thinking about this book and the church, I also thought about academia and in particular biblical and theological scholarship, and it struck me hard when I realized that the guild of biblical and theological scholars in some ways encourages narcissism as well. We witness the celebrity culture everywhere, in both the church and biblical studies, where the usual suspects don’t just bask in but devour the adulation, glory, and praise—and in fact demand and relish it—even if they are speaking on subjects about which they may actually know next to nothing as professionals. The opportunity to get one’s face on another poster or website is simply too good to pass up. But I am sure that this comes as no surprise to anyone who has been to one of these once-in-a-lifetime, held-every-couple-months, conferences and has seen who attracts what and whom.

The non-celebrities—though not necessarily non-narcissists—are a part of the problem, because they enable such narcissism in these individuals and no doubt derive secondary narcissistic pleasure from absorbing the shared radiance of the narcissists-in-chief. Such a phenomenon is known not only in North America but around the world—what better sphere of narcissistic grandeur than thinking one has the entire globe at their beck and call.

I am increasingly suspicious of these mega-churches, of many of those who pastor such churches, and especially of so-called biblical and theological scholars who love to hear themselves speak even when they have very little, and especially nothing new, to say. I think we all should be cautious in this regard and stop enabling such people.

One thought on “Narcissism, the Church, and Academia”