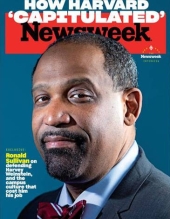 A few weeks ago, Newsweek published an article interviewing Ronald S. Sullivan, Jr., a Harvard professor and nationally recognized attorney, on the non-renewal of his and his wife’s contracts as faculty deans of Winthrop House, one of Harvard’s residential communities. Incidentally, the Sullivans were the first black faculty deans at Harvard.

In short, the decision not to renew the contracts of the Sullivans resulted from student protests against Sullivan’s decision to represent the notorious Harvey Weinstein, a film producer accused of multiple counts of rape and sexual assault. Weinstein was a major catalyst for the #MeToo movement from a few years ago, where women who were allegedly sexually assaulted by him came forth publicly about their experiences. Publicly, he is already guilty of these crimes, but he has not yet been legally convicted of them. For what it’s worth, I think he probably is guilty of most, if not all, of these allegations, but the fact is that due process has yet to have taken place.

I encourage you to read through Sullivan’s entire interview, because I think it sheds some level-headed light on this situation. I’m concerned with this situation at Harvard (although Sullivan and his wife are still professors at the law school), as well as other similar situations we’ve blogged about, which unfortunately may reflect the future of higher education.

Schools must realize their role and their students’ roles. Students are not consumers; they are students. Schools fail when they adopt a business model, because they are… schools, not businesses. The goal of a business is to generate (positive) income. The goal of a school, at any level, is to teach, educate, train, equip—all of those things, among other things—their constituents, the students, to advance to the next level, whatever that “level” might be. A good school does these things well. Those who have the privilege of leading the school, whether they be professors, teachers, or administrators, have the task and duty to teach, educate, train, and equip students… not to seek leadership from them. This isn’t to say that the goals of businesses and schools don’t overlap to some degree, but it’s important to distinguish their primary purposes.

The role of the student is to learn—to learn not only facts and figures but how to think, to think critically, to analyze, to grow in their intellect (and hopefully in all areas of life as well). The teacher and the administration, the “school,” is there to guide them through that process. And as Sullivan says, Harvard lost a great opportunity here to teach their students about how to separate their emotions from logical thinking by capitulating to their protests (and according to him, these protesters were a small number).

Here is what Sullivan has said:

Instead, the administration capitulated to protesters. Given that universities are supposed to be places of considered and civil discourse, where people are forced to wrestle with difficult, controversial and unfamiliar ideas, this is disappointing.

I am profoundly troubled by the reaction of university administrators who are in charge of student growth and development. The job of a teacher is to help students think through what constitutes a reasonable argument. It is a dereliction of duty for administrators to allow themselves to be bullied into unprincipled positions.

Unchecked emotion has replaced thoughtful reasoning on campus. Feelings are no longer subjected to evidence, analysis or empirical defense. Angry demands, rather than rigorous arguments, now appear to guide university policy. This must change. Until then, universities are doing a profound disservice to those who place their trust in us to educate them.

(The above are excerpts from his article in the New York Times.)

“I certainly cannot dispute how some people feel,” he says. “But I strongly believe that it’s … the job of the educator is to help students determine whether their feelings are rational… I would argue that a good educator would explore those feelings and help educate the student in a way where the student can exist in a diverse, heterogeneous environment.” (From the Newsweek interview.)

Specifically regarding this situation, the opportunity to teach students about due process, about why we have a judicial system in America, about resisting knee-jerk reactions to what they see on social media (or other forms of media), about the fact that everyone deserves the right of trial and the best representation possible (regardless of what reputation the accused may have), was entirely missed. The fact is that Harvey Weinstein has not been tried in a court of law, but he is essentially considered already guilty of the crimes he is accused of. The difference between him and Bill Cosby, for example, is that Cosby has been tried and found guilty for (some of) his crimes. But due process exists for a reason, and Sullivan—whether against his better judgment or not—decided to represent Weinstein within the proper judicial format. That is no crime and Sullivan has every right to make that decision to represent him. I think Sullivan, as a nationally recognized defense attorney who represented people like Aaron Hernandez (a New England Patriot tight end who was accused of double murder and while in prison killed himself) and Usaamah Rahim (an alleged terrorist in Boston) among others without such protest, simply saw this opportunity as a difficult legal challenge worthy of an excellent litigator. Whether or not it was a wise decision, it wasn’t a morally wrong one.

My hope is that educational institutions adhere less to the Burger King way of business (“Have it your way”) and adopt their basic purpose: to educate, to train, and to equip students to think critically and to be contributing members of society. As Sullivan says, student protests are welcome, and many student protests have led to great societal changes in history. Students should indeed be free to speak their minds, 100%. And in some ways, students are expected to protest a lot of things that happen at school! The leaders of these schools, however, fail their students when they capitulate to their protests without critical evaluation and without correcting their students if their protests are misled.

I realize that many schools are facing budgetary and enrollment challenges, and a major solution to these challenges is increasing student enrollment (higher enrollment = more money; although Harvard can hardly be in this category!). But quality students who want to learn, grow, and achieve their goals tend to respect and learn from those who firmly yet graciously teach, guide, and offer them opportunities for growth. After all, isn’t that what education is all about? Schools aren’t businesses, and the less they adhere to business principles and the more they continue to be what they’re supposed to be—a fount of knowledge, growth, guidance, and critical thinking—the more they’ll continue doing what they’re supposed to be doing and continue to contribute to the growth of society.

2 thoughts on “Another Elite Institution Capitulates to Student Pressure”