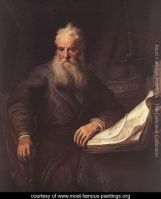 I recently gave a talk on Paul the Apostle, entitled “Paul and the Contemporary Church: Learning from the Church’s Most Important Theologian and Church Planter.” I was asked to do this talk in response to some groups within the contemporary church who claim to find greater sympathy with Jesus than they do with Paul.

Such positions—often held by those in their twenties or so, or so it appears—seem to revolve around views that the “Jesus meek and mild” was a poor peasant who wandered around Galilee befriending the outcast, while Paul was a part of the educated elite who imposed his iron fist on churches as a misogynist. Such views are of course stereotypes—but then the views themselves are stereotypes.

What is often neglected is that how one tends to view Jesus or Paul is often highly influenced by cultural interpretation. The history of interpretation of the Bible often has as much influence upon how one reads the text as the text itself, or so it often seems.

The view of Jesus as the proto-socialist is a direct remnant of nineteenth-century liberal theology. Liberal theology rejected the notion of Jesus as a divine man and in its place erected the humanitarian Jesus who reflected many contemporary liberal social values, often further developed in the twentieth and now twenty-first centuries regarding social concerns, pacifism, concern for the outcast, etc.

The view of Paul as distinctly different from Jesus is similarly dependent upon a view that was developed in German scholarship going back to F.C. Baur and continued through William Wrede and Rudolf Bultmann that saw Paul as the “second founder of Christianity.” This view contends that there was an early split within the factions of the church, with one side following Jewish Christianity as represented in Peter and James, and the other following Gentile Christianity as represented by Paul. As a result, Paul in effect becomes Christianity’s refounder as his writings became the basis of Christian dogma. In other words, the effort is to separate the two and pull them and their teachings apart.

In my talk, I tried to address several of the matters raised by such disjunctive thinking. I first noted that the Judaisms of Paul and Jesus were much more similar than distinct. It is true that Jesus was a Palestinian Jew and Paul was a Diaspora Jew, but Judaism of the first century was already Hellenistic Judaism. The division was not between an Aramaic church and a Greek church, as both languages were already found within the complex multilingualism of even Palestine.

I then addressed the matter of how much we are influenced by the cultural and interpretive assumptions of our age. We like to think that we are simply seeing things as they are, but we don’t realize that biblical interpretation is a very complex matter. It involves the very difficult task of trying to understand ancient texts written in ancient languages with no native speakers within their original (to say nothing of now contemporary) contexts. It also involves nearly two thousand years of interpretation, first within the church and then for the last several centuries within critical scholarship.

My third point of emphasis was to address some of the assumptions of interpretation and raise the question of whether in fact Paul had encountered Jesus during the time of Jesus’s earthly ministry, not just during his Damascus road experience. I revisited a theory suggested at one time by Johannes Weiss, William Ramsay, and James Hope Moulton that Paul had “met” Jesus. After all, they were near contemporaries, both residents in Palestine. Jesus was a popular teacher who attracted widespread attention, and Paul was the student of one of the leading Jewish teachers. To my mind, it is inevitable they would have had such contact, to the point that Paul had some form of first-hand knowledge of Jesus and his teaching.

I recognize that the direct New Testament evidence for such encounters is not great. However, there are numerous points of contact between the teachings of Jesus and Paul that point to such influence of Jesus on Paul. Paul not only knows a surprisingly lot about Jesus, but he reflects his teaching on a number of subjects. There is enough to suggest that Paul may well have either been one of Jesus’s inquisitors or certainly an auditor when he taught. This seems to make the best sense of passages such as 1 Corinthians 9:1, where Paul rhetorically asks whether he has not seen the Lord, or 2 Corinthians 5:16, where he raises the question of his having known Christ according to the flesh, even if he now knows him no longer in that way. This makes better sense of Paul’s experience in Acts 9, where he seems to recognize the risen Jesus.

With this reconceptualization of the relationship of Paul and Jesus, we can see far greater continuity than diversity between them and their thought. This provides a strong foundation for seeing how Paul is not the refounder of Christianity but the interpreter of the teaching of Jesus. This provides the basis for Paul’s own teaching—e.g. the logical and sustained argument he presents in the book of Romans, moving from the human condition, to justification, to reconciliation, to life in the Spirit, and then to the future of Israel, before offering practical advice—and the foundation of his missionary endeavors.