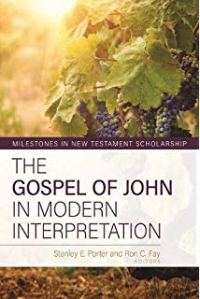 Following the style of the Pillars in the History of Biblical Interpretation series (Wipf & Stock), a new series entitled Milestones in New Testament Scholarship has appeared. The first volume, edited by Stanley E. Porter and Ron C. Fay, is The Gospel of John in Modern Interpretation (Grand Rapids: Kregel, 2018). While Pillars focuses on particular scholars throughout the history of interpretation, Milestones is organized around a particular corpus or topic within New Testament scholarship and identifies key scholars who have influenced that corpus or topic.

The inaugural volume of this series contains ten essays (including the introduction and conclusion by the editors) of eight key Johannine scholars. These essays originated from the Johannine Literature Consultation (now Section) at the annual Evangelical Theological Society meetings in 2014 and 2015. The Johannine scholars examined in this book and their corresponding authors are:

The hope for the editors of this series is that it will serve to create a history of New Testament studies, arranged according to corpus or subfield. The first volume on Johannine literature seems to set a great tone for the rest of the series.