Last week was an eventful one for two of the bloggers here at Domain Thirty-Three, as we attended the Evangelical Theological Society and the Society of Biblical Literature annual meetings. What made it more eventful was that they were held in two different cities, the first in Providence, Rhode Island and the other in Boston, Massachusetts. Providence, we found, was a more interesting city than I (Dave) imagined, surrounded by beautiful New England architecture and home to the first established Baptist church in America. Boston, of course, has a rich history and beautiful landscape as well. The Boston Library was within walking distance of the conference, and I had a chance to take an official tour of the building. For those who missed it, I highly recommend taking a tour next time when in town. The original part of the building is more like a museum, filled with meaningful artwork intentionally crafted for the building, something modern libraries lack. The Boston Library is also the first of the modern library model, where any resident can have access to all of its resources without any membership requirement.

As for the conferences themselves, as mentioned in the previous post, we presented a total of five papers (Stan four and Dave one). The following are summaries of these papers.

I (Stan) did my first paper on “Orality and Textuality and Implications for the New Testament” in the New Testament Canon, Textual Criticism, and Apocryphal Literature Section of ETS. The focus of the section was on Orality and Textuality in Early Christianity. There was a broad scope of papers. My paper drew upon the distinction between spoken language and written language by Michael Halliday to discuss how such categories might be useful in discussing the New Testament. I found that even though the New Testament is a written document—even when it purports to represent speaking—there are some distinctions that can be made. The Hallidayan distinctions were roughly in effect, even if the boundaries were not as clean as one would like. The session also included a paper by our colleague Francis Pang on how to understand Papias’s statements about Mark and Matthew. Overall, even though the session was diverse, there were some interesting moments, especially when questioners engaged the presenters. I am going to try to develop my paper further by testing more passages to determine if we can find a useful means of distinguishing material that originates either in speaking or writing.

My second paper was “What Does ‘Always Reforming’ Exegesis Mean for Contemporary Interpretation?” This paper was in the New Testament Greek Language and Exegesis section on Greek Exegesis and Semper Reformanda. I delved into and problematized the phrase “always reforming” in several different ways. These included the fact that it is probably better understood as “always being reformed,” it grew out of the Dutch Second Reformation and the dispute over Arminianism, and must be understood in the wider context of the reformed church always being reformed according to the word of God. The three papers were followed by responses to each other by the contributors, which was done all in good spirits but surprisingly productive, and then questions from a healthy crowd that remained until the end. The more I got into the topic, the more I wondered why I had done this paper, but in the end I was glad I did it, because I think that it helped to clarify that the invoking of such shibboleths is unhelpful unless they are rightly defined.

My (Dave’s) paper was in the open session of the New Testament Greek Language and Exegesis section, entitled “‘The Unbelieving Husband Has Been Unsanctified’? The Perfect Tense-Form and 1 Corinthians 7:14.” I outlined the current views of the meaning of the perfect tense-form within the verbal aspect framework, either stative, perfective, or imperfective aspects, and argued for the stative aspect making the best sense of this difficult passage. The discussion was helpful, although most of the participants focused on issues not related to aspect. Our friend, Marty Culy, however, who chaired the section, questioned me on how the perfective aspect reading could possibly fit the context, given its non-temporal nature.

The fourth paper was a “summary, response, and interaction” with a recently published book, Biblical Leadership: Theology for the Everyday Leader, to which I (Stan) contributed a chapter on Acts and the Jerusalem Council. I drew out six principles about leadership that were grounded in the events of the council. This entire session was scheduled near the end of the conference, and with many people either tired out or already making their way to Boston, the number of attendees was disappointingly small, especially since the papers that were presented offered some interesting insights into leadership. I am thankful for the opportunity to write the chapter and to summarize it because of my work on Acts. 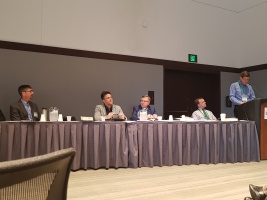 The previous papers were at ETS; my (Stan’s) final paper was at SBL, a response to a recent book on the Greek verb, given in a session of the Biblical Greek Language and Linguistics Section. The two editors of the book made some comments about the book, and then three respondents, Buist Fanning, Constantine Campbell, and I, gave responses. There was then time for further discussion between the editors and respondents, before concluding with a few minutes for questions from the audience. Fanning was in a bit of a difficult situation, as he was also a contributor to the volume even though not an invited frontline participant in the conference. Nevertheless, he raised some important questions about several of the major problems in the book, such as some definitions of aspect and how procedural character (one of several terms used, similar to Aktionsart) relates to definitions of aspects especially the one grammaticalized by the perfect tense-form. Campbell, even though he had endorsed the book (and somewhat awkwardly stood by this endorsement), had a number of strong criticisms to make, especially regarding how the book does not represent all of the key voices (he probably means his and mine), its exaltation of a wrongheaded view of linguistics, and its reformulation of traditional grammatical views in linguistic garb. I concurred with most of what Campbell said. My response included some criticisms on the book for presenting itself as insecure (lots of blurbs!), having an inaccurate title (since it includes things beyond the verb and does not represent just one approach), and being very personal in its approach (one cannot help but think it was targeted at me). I focused on the book from the standpoint of Thomas Kuhn and the idea of a paradigm shift. I wondered whether the book was claiming such a shift had occurred, had somewhat occurred, or had yet to occur, because there are indications from contributors in all different directions. I also criticized a number of features of the book. These include its definition of aspect, which is not as morphologically grounded as it should be; the issue of whether Greek is tensed (the editors presented evidence that, inadvertently, supported that an argument can be made that it is not!); the aspect of the perfect; Aktionsart or procedural character of verbs being the primary area of discussion rather than aspect itself; and the overreliance upon cross-linguistic prototype theory at the expense of examination of individual languages. Each of these merits fuller exposition, of course. It appeared that the editors never really engaged Campbell’s and especially my criticisms fully, although some major misstatements were made that needed to be corrected. The major question is whether anything much was accomplished by this discussion. We doubt it. To a large extent the contributors are talking at cross-purposes. I believe—and there are, I understand, typologists who would concur—that one must first examine the individual languages before imposing the typological framework. I also think that the entire issue of verbal aspect has been greatly clouded by the discussion of procedural types, probably out of a need to be able to talk about “aspectual” differences between languages that are not aspectual. The only thing to discuss is not morphological aspect but the character of actions, which ends up being a much more abstract and non-linguistic discussion. Once we return to morphological aspect and rid ourselves of the encumbrance of procedural types, many of the issues become much clearer, such as what we mean by aspect and even the issue of the tenseless nature of Greek and the stative aspect of the perfect. There were also some unexpected outbursts and side conversations in the session that made for an interesting time.

So, ETS and SBL are over for another year. The conferences included all of the regular activities—some great dinners with friends, including the seafood that Boston is known for, some interesting receptions, lots of books to look at and to buy, but most of all some interesting and productive sessions. We look forward to Denver next year.